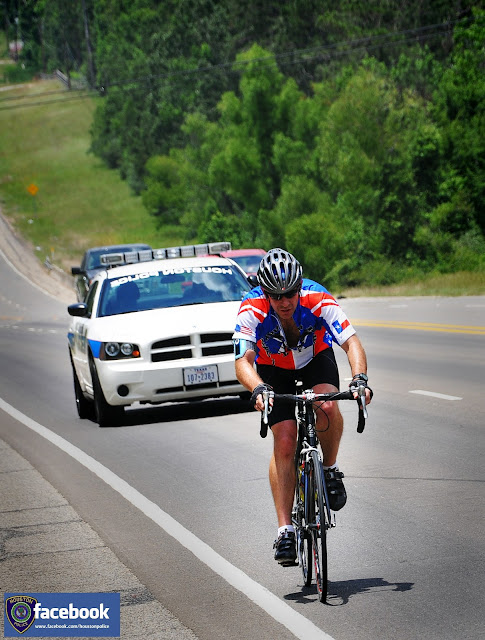 Leukemia is the no. 1 child killing disease. Ten times as many adults as children are stricken with leukemia. Lymphoma rates have nearly doubled since the 1970's. Police officers always want to "catch a killer" and the Houston Police Department (HPD) Bicycle Relay Team's goal is to "arrest these killers" and accelerate The Leukemia & Lymphoma Society's fight against blood cancers.

The Houston Police Bicycle Relay Team will begin their 2,000 mile bike ride to Portland, Maine! This is an unparalleled volunteer effort to raise funds for The Leukemia & Lymphoma Society.

You can participate in this life-saving effort through sponsorship of these hard working officers and civilians.

Including the donations from last year, the total contributions given through the Houston Police Bicycle Relay Team have exceeded $5.4 million. Because of generous giving like this, continuing research has resulted in survival rates for the most common form of childhood leukemia rising from 4% in 1960 to 90% in 2010! Further, leukemia researchers pioneered and developed most major cancer treatments, including chemotherapy, transfusion and radiation therapies, bone marrow and stem cell transplants- all made possible by donations given by The Leukemia & Lymphoma Society. Leukemia research is looked upon as the window to the cure of all cancer!

You can help by making a donation towards the fundraising goal of the HPD Bicycle Relay Team by clicking on their name below.

Just the facts about the HPD Bicycle Relay:

The 2013 Bicycle Relay marks the 32nd anniversary of this event.
Approximately 30 men and women from Houston Police Department will ride as well as other civilians closely associated with leukemia, such as patient family members, doctors and survivors.

The 2013 relay is slated to depart from Discovery Green Park in Houston some time in June and arrive in Portland, Maine five to seven days from their Houston departure date.
Previous destinations include Alaska (2 times) Canada (9 times) California, The White House, Maine, and most other places in between.

The Houston Bicycle Relay Team has made this journey before to Portland, Maine, where they made a special visit to President George Bush Sr.'s home.

Each member of the relay team wears a special "dog tag" bearing the name of an honored patient/survivor to help encourage them throughout this trip.

The HPD bicycle relay team has been commended by former President Bush in his "thousand points of light" program for their efforts and for helping to improve the overall quality of life.
In the past 31 years, participants have raised over $5.4 million for The Leukemia & Lymphoma Society and have pedaled almost 70,000 miles!

To register for the team, make a donation to an individual rider or make a general donation, please visit this link:
http://www.lls.org/aboutlls/chapters/txg/events/HPDBikeTeam1/
at 5:52 AM