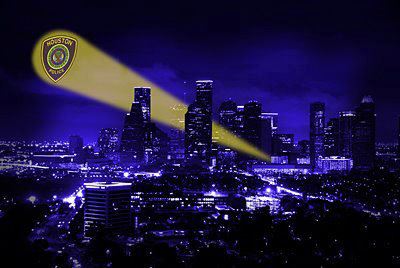 Criminal Intelligence Analysis Hernandez & Jackson work within a specialized unit called the Real Time Crime Center for the Houston Police Department. The Real Time Crime Center is a centralized technology center in which its primary purpose is to expediently capture and provide field officers/investigators with instant and comprehensive information to help identify suspects, crime patterns and prevent emerging crime.

Recently, both Criminal Intelligence Analysis Hernandez & Jackson were contacted by the Robbery Division and the Investigative First Responders Unit to assist in gathering information regarding an aggravated robbery.

This criminal escapade transpired at a local pawn shop in the Houston area. The business was open and staff was assisting customers when all of the sudden an armed individual aggressively entered the pawn shop waving his weapon and yelling at everyone to hit the floor. Fearing for their lives, the staff and customers immediately complied. Once face down on the floor, the suspect began to violently smash all of the glass counter tops containing high dollar items and jewelry. Within in a matter of seconds the suspect fled the scene with the stolen items. Once management realized that the suspect was gone they immediately hit the panic alarm and the police responded to the scene. Fortunately no staff, customers or bystanders were injured or taken hostage during the incident.

Officers arrived on scene and gathered all resources of information broadcasting the suspect’s description and getaway vehicle information over the radio. Within minutes, officers within the area spotted the vehicle and attempted to apprehend the suspects. During the pursuit the passenger bailed out of the vehicle on foot and officers were able to capture him without further incident; however, the accomplice/driver eluded police and escaped.

The next day Robbery detectives along with the Investigative First Responder’s Unit assigned to the case contacted the Real Time Crime Center to assist in finding any possible leads concerning the second suspect and vehicle used in the robbery.

The information provided by both Criminal Intelligence Analysis Hernandez and Jackson was critical in the expedient apprehension of the second suspect. Investigators armed with the additional information responded to the address provided and immediately located the vehicle, additional stolen items from the pawn shop and the second suspect that was involved in the aggravated robbery with a deadly weapon.


Due to CIA Hernandez and Jacksons help, analytical skills and tenacity, the other violent suspect was arrested before he could commit any other heinous crimes in the City of Houston.
at 6:58 AM