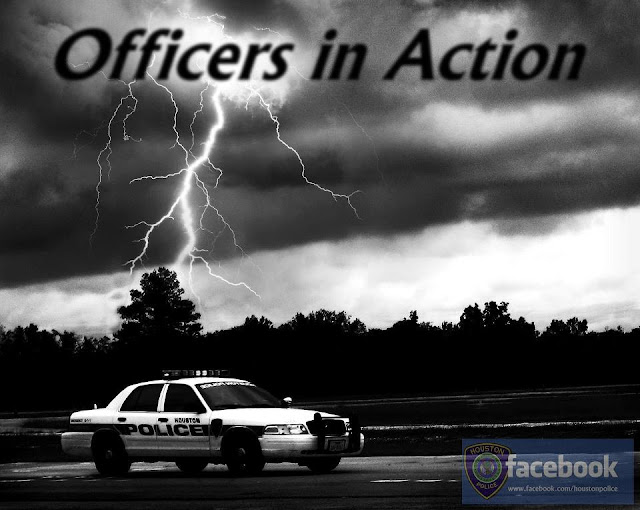 Recently, Officers A. Maldonado and J. Newberry were dispatched to an Assault in Progress call for service. As they were driving to the scene, they were unaware that a suspect had already stabbed his wife and two infant children.

Once they arrived, they saw the suspect inside the home through a broken window holding a large butcher knife to his own throat. The suspect was holding a female who had visible injuries and demanded that officers speak with him in Spanish only and that the media be summoned. The officers soon found out from witnesses that the suspect’s wife and two infant children were inside the residence.

SWAT was immediately contacted to assist. After SWAT was contacted, officers set up a perimeter around the location as back up patrol units and supervisors began to arrive at the location.

Officer M. Salazar and Sergeant Benavides spoke with the suspect in Spanish and saw that the female he was holding was covered in blood. She was breathing and showed some movement, but was otherwise unresponsive. The officers noted that the suspect would become more agitated whenever an officer approached close enough to see inside the residence. As Officer Salazar and Sergeant Benavides spoke with the suspect, Lieutenant Hamilton could see that the injured female was staring at a position on the floor in front of her. He moved close enough to see through the window that the suspect’s two infant children were lying on the floor also covered in blood. Lieutenant Hamilton implored the suspect to let him have the infants so that medical aid could be rendered but the suspect only yelled for him to get back.


Lieutenant Hamilton quickly made the decision there was no time available to wait for SWAT officers to arrive and he formed an entry team to come to the aid of the injured family members.
Lieutenant Hamilton, Sergeant Bryant, Sergeant Benavides, Officer Maldonado, and Officer J. Hayes made entry via an unlocked back door. Lieutenant Hamilton entered first followed by Officers Maldonado and Hayes with their Tazers at the ready to provide less than lethal force followed by the two sergeants backing them up. Lieutenant Hamilton approached the suspect and again implored him to drop the knife and allow the injured to be treated. The suspect yelled for him to get back and the suspect began to cut into his own throat with the knife he was holding. Lieutenant Hamilton then ordered Officer Maldonado to discharge his Tazer at the suspect. The Tazer darts struck the suspect but the suspect began to pull at the Tazer wires so Lieutenant Hamilton also ordered Officer Hayes to discharge his Tazer at the suspect as well. After both Tazer’s were successfully deployed, the other entry team members were able to take the suspect into custody and recover the knife he had been wielding.
The officers were then able to remove the injured family members to waiting HFD paramedics who assessed and triaged the wife and two infants after which all three were transported to the hospital. The suspect had injuries to his neck and he was transported with police escort as well. Sadly, the youngest of the infants, an eight month old girl, succumbed to her injuries at the hospital. The other infant, a one year old male, and his mother both suffered serious injury during the initial assault by the supect but were expected to survive.
Lieutenant Hamilton recognized the special circumstances and impending danger and took prompt and effective action while lives were at stake. HPD would like to recognize the following officers and supervisors who handled this incident in an exemplary manner and would like to commend each of them for their actions that night.
Lieutenant D. Hamilton
Sergeant D. Bryant
Sergeant D. Benavidez
Officer A. Maldonado
Officer J. Newberry
Officer J. Hayes
Officer M. Salazar
Officer C. Brewster
Officer M. Quiroga
Officer J. Cox
Officer C. Bautista
Officer T. Salina
Do You have what it takes? Apply Today.
at 8:14 AM