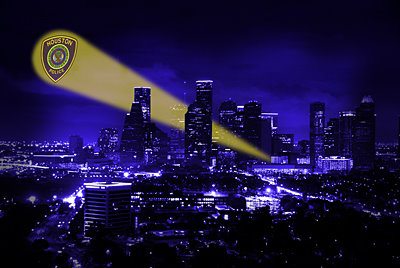 The Real Time Crime Center (RTCC) is a centralized technology center in which its primary purpose is to expediently capture and provide field officers/investigators with instant and comprehensive information to help identify suspects, crime patterns and prevent emerging crime.
Recently, an unknown female driver, who had been drinking approached an intersection and collided with a motorcycle nearly killing the rider. The rider only survived her injuries after a quick responding HPD officer arrived at the scene, administered CPR to the lifeless victim and after reviving her, she was transported to Ben Taub for emergency care. The officer’s life-saving action saved the life of the severely injured victim. The driver of the vehicle fled the scene without identifying herself or calling for help. The only clue available to investigators was a possible plate number provided by a citizen who witnessed the horrific accident and watched as the driver fled the scene.
HPD investigators armed with only a possible plate number, provided by a witness, an investigation of the vehicle would be the only way possible to find and bring the suspect to justice. The determination of the officers proved fruitful when they found the suspect’s car hidden in a parking lot in a nearby apartment complex.  Investigators learned that the suspect was picked up and fled in another car, but before she fled with the accomplice, a second car was parked next to the suspect’s car in an effort to conceal the suspect’s car from being found. Investigators also learned that the owner of the second car also owned the car abandoned by the suspect.  As the investigation was progressing, the suspect returned to the scene and was watching the investigation within a nearby crowd, when an alert officer remembered the description of the suspect detected and detained her for questioning.
During questioning, the suspect was evasive with her identity and was not helpful to investigators and she denied any involvement in the hit and run accident that nearly killed a motorcyclist. The investigators were confident they had the right person in custody, but they did not know her identity and the suspect was being evasive and uncooperative during questioning. The investigation was at a critical point in the investigation and needed help, so they contacted the RTCC.
This assignment was given to one of the RTCC’s top analyst, CIA Contreras. He utilized numerous Real Time Crime Center (RTCC) databases in order to obtain any information associated with the suspect. CIA Contreras went to work and in a short time was able to obtain the suspect’s identity, as well as her association with the vehicle. He also discovered that the suspect was giving investigators a fictitious partial name. Confronted with this new information, the suspect relented to her involvement, admitted her guilt and gave investigators a confession.
The case was solved and charges were filed. HPD would like to commend CIA Contreras and all the patrol officers involved for a job well done. Because of CIA Contreras experience and skill, this investigation was brought to an expeditious end.
at 7:17 AM