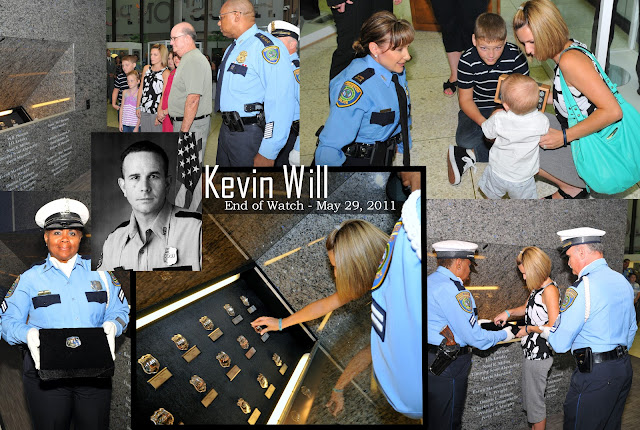 On May 29, 2011, Officer Kevin Will was struck and killed by a drunk driver as he investigated a hit-and-run accident involving a motorcyclist on the Loop 610 North, near Yale Street, at approximately 3:15 am.
Officer Will was interviewing a witness to the motorcycle accident when the drunk driver drove around barriers and emergency vehicles that were blocking the closed freeway. Seeing the vehicle approach, Officer Will warned the witness to jump out of the way. The citizen was able to jump to safety moments before Officer Will was struck and killed. Officer Will’s last act as a police officer was to save an innocent victims life from the oncoming vehicle.
Officer Will had served with the Houston Police Department for almost two years. He is survived by his wife, three children, parents, and brother.

On Monday, (July 9, 2012) family members arrived at police headquarters where a badge ceremony took place retiring Kevin’s badge. The badge was placed on the Wall of Honor located within the police museum at 1200 Travis.
It was somber moment and one that provided extreme heartbreak as Kevin’s youngest child was also on hand and never got the chance to meet his father before his death. Kevin’s wife was pregnant with him at the time of his passing.
Rest in peace Kevin, you will always be remembered.
at 6:00 AM

RIP brother Will (HERO). You will always be remembered and never forgotten.