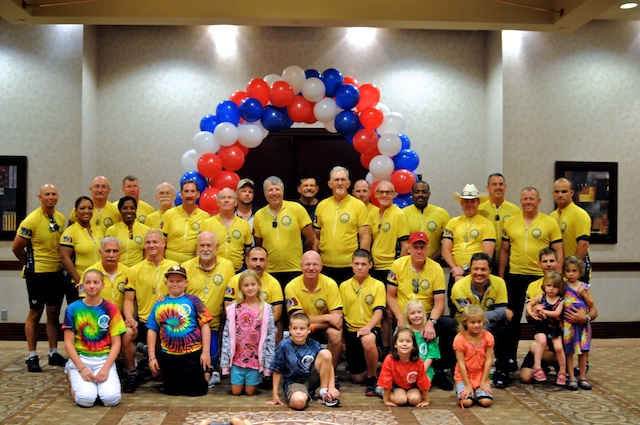 Leukemia is the no. 1 child killing disease. Ten times as many adults as children are stricken with leukemia. Lymphoma rates have nearly doubled since the 1970's. Police officers always want to "catch a killer" and the Houston Police Department (HPD) Bicycle Relay Team's goal is to "arrest these killers" and accelerate The Leukemia & Lymphoma Society's fight against blood cancers.

The Houston Police Bicycle Relay Team will begin their 1,900 mile bike heading west with a stop at the Grand Canyon before heading into San Diego. This is an unparalleled volunteer effort to raise funds for The Leukemia & Lymphoma Society.
Just the facts about the HPD Bicycle Relay:

The 2012 Bicycle Relay marks the 31st anniversary of this event.
Approximately 30 men and women from Houston Police Department will ride as well as other civilians closely associated with leukemia, such as patient family members, doctors and survivors.

The 2012 relay is slated to depart from the Police Academy or Discovery Green Park in Houston at 9:00 a.m.on Tuesday, June 26, 2012 and arrive in San Diego, California on Monday, July 2, 2012.
Previous destinations include Alaska (2 times) Canada (9 times) California, The White House, Maine, and most other places in between.

Each member of the relay team wore a special "dog tag" bearing the name of an honored patient/survivor to help encourage them throughout this trip.

The HPD bicycle relay team has been commended by former President Bush in his "thousand points of light" program for their efforts and for helping to improve the overall quality of life.

In the past 30 years, participants have raised over $5.2 million for The Leukemia & Lymphoma Society and have pedaled over 67,500 miles!

For more information please visit: www.hpdrelay.com
at 6:34 AM

GOD BLESS YOU ALL! AS MY HUSBAND IS TAKING TREATMENT FOR HIS CHRONIC LYMPHOCYTIC LEUKEMIA AT MD ANDERSON THIS MORNING, WE ARE WATCHING THE SEND OFF OF THESE WONDERFUL, SELFLESS PEOPLE! MAY GOD KEEP YOU ALL SAFE ON YOUR JOURNEY FOR US! SUZANNE STRICKLAND

God Bless you all! As my husband is lying at MD Anderson undergoing treatment for his Chronic Lymphocytic Leukemia, we are watching the send-off of these brave, selfless people! Thank you and may God keep you all safe!