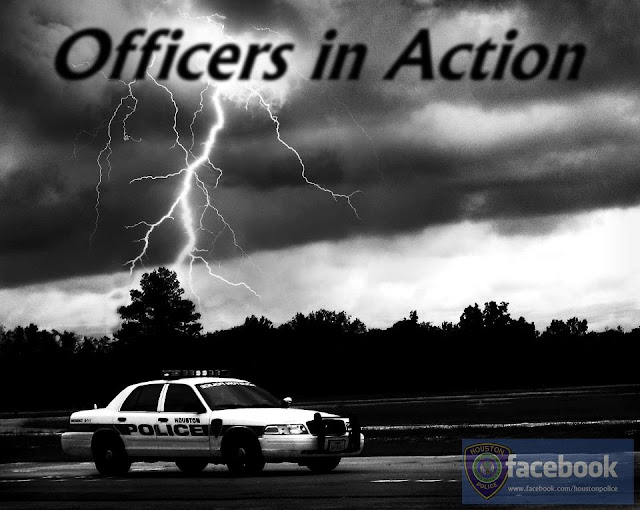 Recently a suspect with a pistol and his face partially covered with a bandana entered through the back door of a pizza restaurant and confronted the manager and another restaurant employee. With pistol in hand, the suspect demanded money f...rom the manager. The manager handed over a large amount of cash to the suspect who placed the money into a plastic bag. The suspect then left the building and ran across the street and got into a car. The car was seen speeding off by a nearby witness who wrote down the license plate. This information was given to the responding officers as they arrived on the scene.

The suspect’s vehicle license plate came back registered to a nearby residence. Officers K. Ahiabor, R. Walker, J. Pritchett, M. Carrion and C. Porche went to this location and located the vehicle which was used in the robbery with two male suspects still sitting inside the car. The suspects were detained without incident while more information was gathered regarding the robbery.

Back at the robbery scene, Officers C. Onwuka and R. Freeze were questioning the restaurant manager along with another store employee. During the questioning, these officers became suspicious of the employee who was inside when the robbery took place. The officers obtained the employee’s cell phone number and learned that his phone number was listed as an incoming call on the cell phone that belonged to one of the two suspects that were being detained. The phone calls were made just minutes prior to the robbery.

Meanwhile back at the location where the two suspects were being detained, Officer Ahiabor was told by one of the two suspects that the money bag and bandana were hidden in a nearby trash can. These items, along with the stolen cash were recovered.

As the investigation continued, the armed robbery suspect was positively identified by the restaurant manager as the person who held a pistol and robbed her. It was also learned that one of the two suspects detained was also a pizza restaurant employee who worked at this same restaurant. Both suspects that were detained, along with the male employee present during the robbery were transported to the Robbery Division where they soon all confessed to the planning and the robbery of the pizza restaurant.

These officers did an excellent job in investigating and interviewing the robbery suspects. Because of their quick response and initiative, the truth was learned about who was involved in this robbery. HPD would like to commend these officers for a job well done.
at 7:31 AM