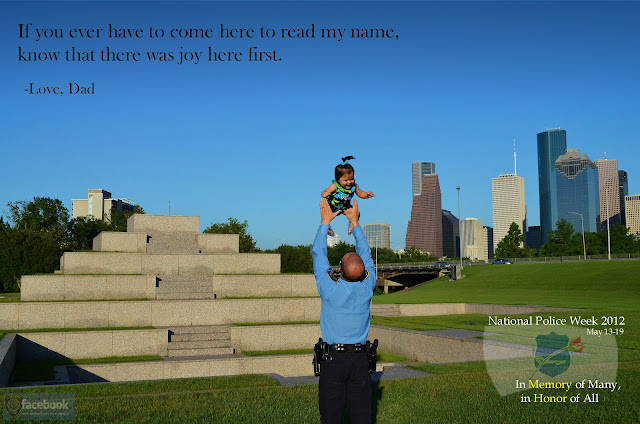 At 7 p.m. Friday, May 18th, Houston Mayor Annise Parker, Police Chief Charles A. McClelland, Jr. and members of the Houston Police Department will attend a memorial service at the Houston Police Officers' Memorial, 2400 Memorial Drive, to honor those officers who have given their lives in the line of duty.

The ceremony will begin with a procession at 6:20 pm, starting at the HPOU Building, 1602 State Street, and walking to 2400 Memorial Drive Memorial Drive to conclude with the placing of a wreath at the HPD Officers' Memorial. Included in the ceremony is a candlelight vigil for fallen officers, a roll call of HPD officers who have lost their lives in the line of duty, a 21-gun salute, TAPS by the HPD Bagpipers, and a fly-over by HPD helicopters. The vigil will conclude at approximately 8:30 PM.

It is during Police Week that we remember and honor those men and women who have given the ultimate sacrifice of their lives so that we may live in safety and peace.
at 8:30 AM