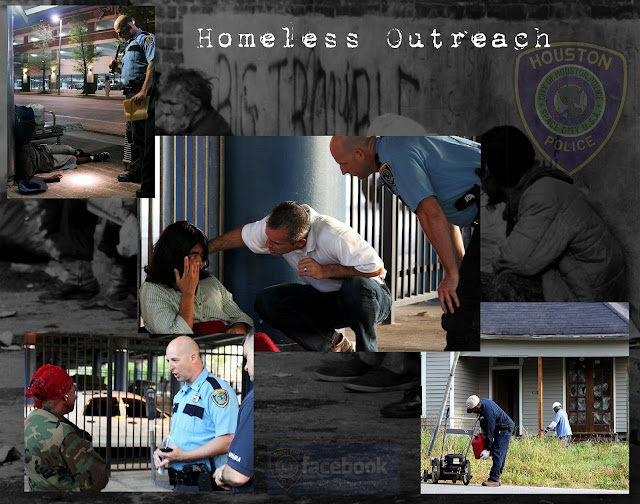 Showing a side of the Houston Police Department not always seen, officers with the South Central Patrol Division recently participated in their division’s monthly homeless outreach program. Once a month, beginning before dawn, the program partners a select team of HPD officers with homeless organizations. The teams then hit the streets, checking places homeless people are known to frequent.

The program started in 2006 in response to neighborhood complaints. Rather than simply arresting homeless individuals for misdemeanor violations such as trespassing only to see them return to the streets, and sometimes the same location the next day, the program seeks to help these people meeting their needs long-term. That is where the partnership with so many homeless organizations plays such a crucial role.

“We make no arrests on outreach day,” said HPD Officer Michael Frazee. “We’re out here just to educate and inform the consumer on the street about what services are available.”

Sometimes, but not always, those services can involve finding the individual a place to live.

“Some of these people don’t want housing,” said Officer Frazee. “They just want to go in, get a shower, some clean clothes and some food.”

This is why partnering with the local homeless organizations is so beneficial. Because the organization members are paired with officers, they are on the spot, ready to offer immediate assistance or transportation.

Once the homeless people have been helped, Officer Frazee then implements the second stage of the program. He identifies lots overgrown with tall weeds that often have an abandoned building on the premises. These lots need to be cleaned and the buildings locked up. For this, Officer Frazee relies on the city’s Inspections and Public Services, formerly Neighborhood Protection, to help.

“They’ll come out here and mow, clean up litter, and, if possible, secure the property,” said Officer Frazee.

The goal is to prevent the property from becoming a hang-out for trespassers engaging in illegal activity.

In the end, the program is a win for the neighborhoods, can help reduce crime, and can put homeless people directly in touch with organizations that want to help them. It is something that means a lot to everyone involved.

“I think this makes all of us feel good— to come out here and try to make a difference in someone’s life,” said Officer Frazee.
at 1:18 PM