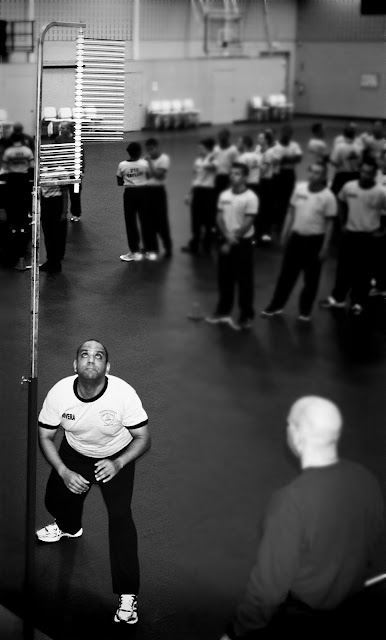 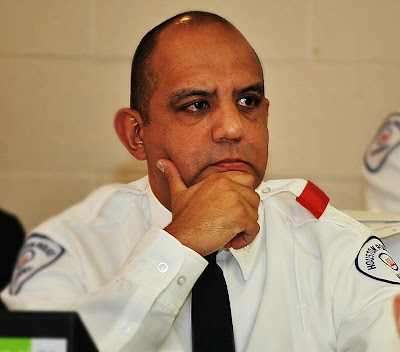 This is the first week of the . For me, Cadet Rivera, this process started back in July at a friend's birthday party where I met Sergeant Brown and was invited to attend an Open House at the . Deep down inside, I knew I was meant for this. However, this was not the first time I had thought about being a police officer. Back on 9-11, when was attacked by terrorists, I was in the car ready to sign-up but my lovely wife asked me not to go because our children were too young at the time. She was right. I would never trade those years. But, now, at age 42 could I make the cut?
Friends and family encouraged me to apply.  The application process was grueling and very introspective.  I realized I had gained too much weight and began working out with renewed purpose. I showed up to my second “Run with the Recruiter” event 25 pounds lighter and was determined to make a good showing. (If you are an applicant, I strongly advise you attend these events.) Four months later, I received the call that I had been accepted to the Houston Police Department as a Cadet.
FAST FORWARD…As I sit in the same classroom with 73 other cadets, I think of the thousands of applicants who want my seat. The weight of the training to come, the physical demands, the family obligations that will be put on hold, and the dedication weighs heavy on me. We are reminded by our instructors that not everyone is cut out to be a Houston Police Officer. They show us the front door and say there is no shame in leaving now. No one left the classroom. Then we were reminded that we were chosen to become police officers and a lot of eyes are watching Class 212.
On that first day, Chief McClelland addressed and welcomed us as cadets and promised that all the hard work would pay off. Captain Ready (academy staff) challenged the class to be prepared and respectful of those who wear a blue shirt. As the week progressed, Class 212 quickly learned that 'attention to detail' is key to getting through the day without doing push ups. Officer Nicola (academy staff) reminded us, "That the only easy day was yesterday."
Class 212 is slowing coming together as a team. The camaraderie is growing and the friendships are getting warmer. Our class leader (McMurtry) is assertive and encouraging us to strive for excellence. All of us are being challenged to reach deep inside ourselves and break all those mental obstacles that keep us from being excellent.
Friday came like a hurricane. The gym staff pushed each cadet during our first physical testing. We took a breather and then got our butts kicked for not following directions. It tested our intestinal fortitude. As I gutted out a push up plank, I knew this correction would eventually end…but would I beat it or let it beat me? An instructor walked by me and whispered "have pride, Rivera."  I beat it.  Everything is done for a purpose and the pain in the gym will keep us from bleeding in the  field.
As I packed my locker at the end of the day, I said good-bye to several cadets.  I smiled.  "Wow, I am in the !"  I am with the best the City of has to offer. I am honored to be in the presence of 73 other incredible men and women who have been chosen to join the Houston Police Department.  I look forward to the next six months.
at 11:37 AM

Keep it up and stay focused!! It will all be worth it in the end when you are wearing the blue!!