In Honor of Officer Kevin Will 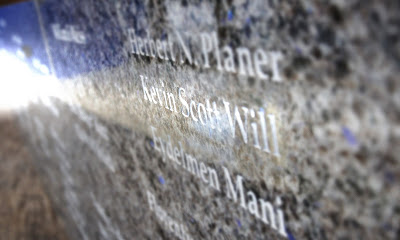 It was a somber evening last week as another name was added to the Wall of Honor for fallen Officer Kevin Will.

The Wall of Honor is located within the Houston Police Museum at police headquarters. It stands as a tribute to all officers who gave the ultimate sacrifice serving the city of Houston and its citizens.

On May 29, 2011, Kevin was interviewing a witness to a motorcycle accident when a drunk driver drove around barriers and emergency vehicles which were blocking the closed freeway. Seeing the vehicle approach, Kevin warned the witness to jump out of the way. The citizen was able to jump to safety moments before Kevin was struck and killed.

Kevin had served with the Houston Police Department for almost two years. He is survived by his expectant wife, two children, and parents.

The engraving was completed as a courtesy by Schlitzberger & Daughters Monuments and Caskets. HPD appreciates your kindness and generosity in completing this very sad task.

Kevin will be missed and never forgotten. Rest in Peace brother and know your family has the support of your brothers and sisters in blue. It is people like Kevin who are our true hero's.

Officer Will's baby was born yesterday! His legacy will live on. God Bless his family.

Rest in peace my brother.