From the "Not So Bright Files" 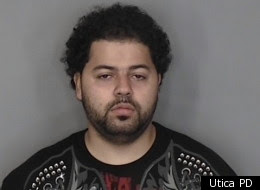 A fugitive from upstate New York who taunted police on his Facebook page to `catch me if you can. I'm in Brooklyn' has been arrested.

The Daily News says U.S. marshals and NYPD detectives tracked Victor Burgos down to an apartment in Brooklyn's Bedford-Stuyvesant neighborhood Monday night, sitting at his computer with his Facebook page open.

The 29-year-old suspect was wanted by Utica police on multiple arrest warrants for domestic violence and harassment of his former girlfriend.

He allegedly issued the Facebook challenge after his mug shot appeared on the Utica Police Department's 10 most wanted list.

Utica Sgt. Steve Hauck tells the News: "He told us via Facebook to come and get him and we did."
at 7:49 AM

That is too funny! I wish they they were all that easy. Great blog!

Wow, really? Whatever makes your job easier. That is too funny! Thanks for the blog. can't wait until you guys start hiring again.