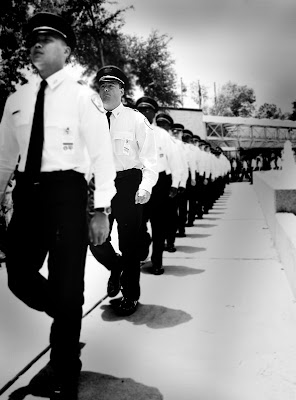 Just five more weeks remaining until graduation, and Class 210 is doing everything we can to avoid the dreaded "Senioritis". Senioritis is an infamous condition the senior class of cadets get when they can see the light at the end of the tunnel. We've been warned by just about every officer who has taught a class that Senioritis can cause feelings of euphoria which may lead a cadet to forget their place in the food chain. This contagious condition may cause cadets to forget to snap to attention quickly enough or not yell "YES SIR" loudly enough. It may cause cadets to smile at inappropriate times or to whisper during a class.

There are treatments for Senioritis, but they are harsh. Commonly prescribed treatments often involve steep hills, bear crawls, ditches filled with mud, and an untold number of push-ups. Thankfully, though, there is a cure. It's called graduation, and it happens on September 27th. The cure only lasts a day, though, as it's quickly replaced by an acute form of confused delirium called Rookiementia. With Rookiementia, the real victims are the Field Training Officers with whom the rookie must ride.

Speaking of riding, I recently had the opportunity to participate in the HPD ride-along program and rode for a day with Officer C. Bradshaw in Fondren Division. I saw first hand what proactive, positive spirited, educated police work is all about. In the academy, you work through scenes on paper, in film, and with actors, but seeing it done flawlessly by an expert for a single shift meant more to me than my entire academy experience. Officer Bradshaw completed a litany of calls with precision handling of angry complainants, sad complainants, scared complainants, and a collection of folks most would agree were extra suspicious. In each case, she went the extra mile for the complainant, doing work behind the scenes that the complainant would likely never know she did for them. In some cases, simply making a report would have sufficed, but she instinctively went the extra mile to make sure no stone went unturned in solving their cases. Not only was I blown away by how effective and efficient great policing can be, but I was inspired to do the same when my turn comes. As Officer Bradshaw pointed out, at the end of the day, it's good to know you did something to actually help people.

One of the best post yet. Most people have no idea.

She is a fine officer.

See you soon on the streets brother.

I wish the ride-along program was available for everyone. I had the opportunity to teach several officers Spanish a couple of years ago with Dr. Quintanilla. All the officers worked diligently to learn the material. I wish I could do a ride-along bet it would be very interesting! :)

You can go on a ride along as a civilian. Simply go to a Dept. Fill out a ride along packet and they will contact you and a few days. Went on one last month and it was a great experience.

1) Always know where you are ( no gps allowed)
2) leave your cell phone in the trunk
3) stay in shape
4) be willing to learn and stay humble, we will praise you when you do good
5) respect other officers
6) treat people like people, even the suspects
7) show initiative

I wish you all good luck!