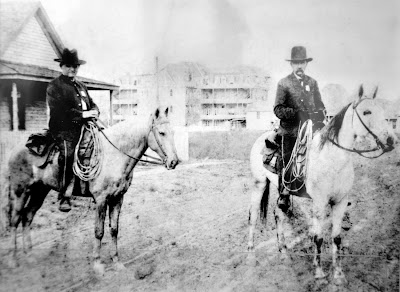 This is the earliest known photograph of Houston police officers. It is believed to have been taken in the late 1880’s in downtown Houston.

The uniform was indigo blue for the coat and the pants had a white stripe down the center of the leg. The hat was also indigo blue and was made by the Stetson Company. The coat and vest made up a suit that was of the style of that period.
at 8:47 AM

Please post more of these old Hpd photos......I love them.

Dido...seeing the history of the Houston Police Department is very interesting!