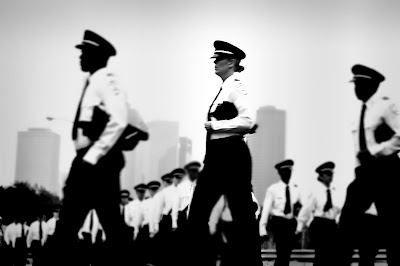 The last time I checked in with the blog we had just finished week 7. We were gearing up for Police Week which was really an eye opener into many divisions you can partake in after patrolling. Many of us spent our lunch hour talking to SWAT, Mounted Patrol, Fox, SRG and the Bomb Squad; after seeing Fox lift off I was convinced that’s where I want to be in 5 years. All week there were hundreds of small school children who were visiting the academy. During lunch they would ask for our autographs like we were famous. You couldn’t help but smile. We would march out to perform a roll call for them and they cheered the whole time. Several cadets commented that it made them a little teary eyed.

Police Week wrapped up with Class 210 marching into the Police Memorial Friday evening. We all knew it would be a somber event, but it really hit home when you saw all the family members who the fallen officers left behind. I just hope my family never visits the memorial to hear my name called. Unfortunately, HPD lost Officer Will, from class 205, the very next week. Class 210 attended his funeral and we were once again reminded of how dangerous this job can be. Several of us broke down during different portions of the funeral, but for me it was the last radio call that sent the tears rolling down my cheek. Officer Will was a true hero to the end.

Week 11 ended with our 2nd PAT test, which was pretty grueling considering the heat and anticipation. The final one in August will be the true test since it will probably be 110 by then! Knowing the PAT test was over we were all looking forward to 4 weeks of "ropin’, ridin’ and shootin’" as Officer Lyall refers to it.

My group went to Firearms Training for two weeks straight. It was amazing! Everyone talked about how driving would be the best, but I have to say I had a blast in firearms (no pun intended.) I wasn’t nervous to shoot even though I don’t shoot often, I was nervous about disassembling my gun and knowing how to put it back together. The instructors gave us repetition drills on everything from drawing and holstering your weapon, to taking it apart and putting it back together. I can now disassemble and reassemble it with my eyes shut. There’s nothing to it. There were a few who had never fired a weapon and struggled in the beginning, but on qualification day they blew it out of the water and most qualified as a Sharpshooter-congrats to them. Our last day of firearms felt like the last day of school. All the testing had concluded, grades were in and then we all sat around cleaning our guns at the picnic tables visiting with one another.

Next week I have driving, the week after that will be Defensive Tactics and then back to the classroom. We’re half way there! Even though it doesn’t feel like September 27th is around the corner our trainers are already prepping for our graduation. We’ve signed off on our certificates, we’re picking out songs and pics for our ceremony and we’re also discussing invitations. I couldn’t wait for the academy to start; it will be bitter sweet to see it end.
at 8:20 AM

enjoy it while it last. come three weeks after graduation, say goodbye to day shift!