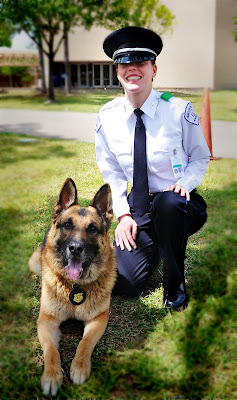 So, a lot has happened in the past few weeks. Since my last entry, our class has had our mid-term Physical Agility Test and I was only five seconds from breaking the department's female record for the 1.5 mile run! I have been running during lunch and working hard. I really want to break the record and determination is definitely going to be the key.

The past three weeks everyone in our class has been busy with skills. They split the class up into four groups and divide us into different training areas. Skills, firearms training, defensive tactics and driver's training.

The first two weeks I was in firearms training where I thought I would be in my comfort zone considering my upbringing with firearms, my experience on a rifle team, and shooting pistols throughout my life. Surprisingly enough, this is where I have been the most stressed out so far during the whole academy. I guess part of it was I felt like I was letting myself down. I did really well until they only give you two seconds to shoot the middle of the target twice. That means “trigger jerking.” Thankfully I qualified and was able move on to defensive tactics (DT.)

Defensive tactics (DT) is interesting and very important for a cadet in training. We learned how to handcuff, "Terry Frisk", do a high risk search, and a take down. This is only the beginning of DT and I'm looking forward to learning more throughout the next three months.

Next week I go to drivers training. I've been told by so many that this week will be the best week of the whole academy. I'm really excited to get behind the wheel of a squad car. Being behind a steering wheel is another comfort zone for me so hopefully my stress level doesn't escalate like it did in firearms.

I feel like I'm doing well and our class is at the point where the days are going by quickly. It's hard to believe we are halfway there and September 27th is just around the corner. I wish I could just blink and I could be on patrol somewhere in Houston already.

With skills, I've had a chance to meet more instructors with more personalities and all of them love what they are teaching.

Finally, I'd like to thank my firearms instructors, Officer Bosky and Officer Walsh. They taught me a lot and helped me accomplish my qualification all while being positive and fun. Even through the blisters and the jammed wrist, I got through it. Although stressful, firearms has been my favorite time so far.
at 1:14 PM

Keep it up girl! You'll be on patrol before you know it... have fun in driving... best part of the academy by far!! :)