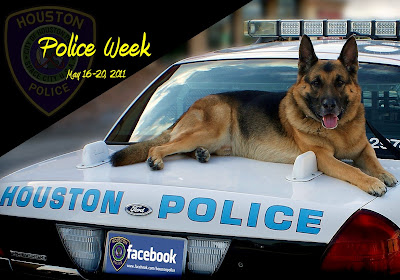 First proclaimed in 1962 by President John F. Kennedy, National Peace Officers Memorial Day is celebrated on May 15th and the week in which the date falls is known as “Police Week.” Law enforcement personnel from around the world gather in Washington DC to participate in the National Peace Officers’ Memorial Service and Candlelight Vigil. Communities across the nation also pay tribute to their fallen heroes. National Police Week serves as a time of reflection and appreciation for the ultimate sacrifice made by exceptionally courageous and noble officers.

The Police Week Awards Ceremony will be held today, at 10 a.m., at the Downtown Aquarium, 3rd floor, 410 Bagby Street @ Memorial Drive. The ceremony will feature the reading of the Mayor’s Proclamation and awards presentations.

Ministers Against Crime will hold A Day of Prayer News Conference at 10 a.m., Wednesday, May 18, at HPD Headquarters, 1200 Travis. Houston area clergy members will gather to reinforce the partnership that exists between the community and the department.

The Annual Memorial Service will be held on Friday, May 20, at 7 p.m., at the Houston Police Officers Memorial site to honor those officers who have given their lives in the line of duty. A procession of police officers will walk down Memorial Drive beginning at 7 p.m. A candlelight vigil will be held and include the placing of a wreath on the Houston Police Officers Memorial, a roll call of deceased officers, a 21-gun salute, the playing of TAPS, and a fly-over by HPD helicopters.

During Police Week, Houston-area school children are once again participating in pre-scheduled tours and demonstrations at the Houston Police Academy, located at 17000 Aldine Westfield. The children will meet with officers and partake in demonstrations from the Helicopter Squad, K-9 Unit, SWAT team, Dive Team, Training Division, and Community Services Unit.

It is during Police Week we remember and honor those who have given the ultimate sacrifice so that we may live in safety and peace. Please join the Houston Police Department in commemorating the law enforcement officers who have paid the ultimate sacrifice, selflessly dedicating their lives in the line of duty while serving to protect the citizens of this great city.
at 7:13 AM

We should all remember the officers that have fallen in the line to protect and uphold the law. It is a huge sacrifice that must no go in vain, and of course forgotten.

With a heavy heart, we shall live our live in honor of our fallen comrades.