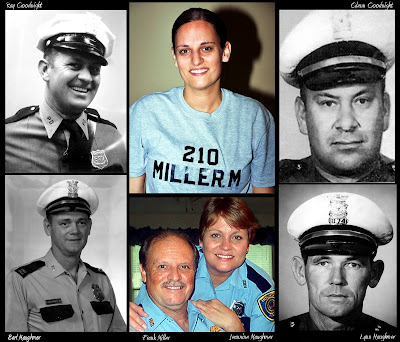 Cadet Meghan Miller of Academy Class 210 (literally) knows how to keep it in the family.

Meghan’s mother Jeannine Maughmer graduated from HPD academy class number 81 in 1978 and retired a senior police officer in 2003. She served in patrol, dispatch, juvenile, and the helicopter division.

Meghan’s father, Frank C. Miller, graduated from HPD academy class number 39 in 1968 and retired as a sergeant in 2002. He served in patrol, dispatch and the narcotics division.

Meghan’s grandfather, Lynn A. Maughmer, graduated from academy class number 13 in 1955 and was a motorcycle officer in 1968 when he died from cancer.

Meghan’s great uncle, Earl Maughmer, graduated from class #1, and retired as a Captain in 1975.

Meghan’s great grandfather, on her mother’s side, E.R. “Ray” Goodnight joined in the 1940’s after World War II before HPD numbered the academy classes. He retired a Lieutenant in 1975.

Just a footnote, their older brother, S.T. “Steve” Goodnight (not pictured) also served the community as a Captain with the Harris County Sheriff’s Office before he died from a heart attack in 1972

FAMILY- figuratively and literally…
at 6:20 AM

I am very proud of the whole Miller family. They are wonderful people.

Miller is an awesome cadet, friend, and co-worker. Always positive and friendly. Way to keep the tradition alive!