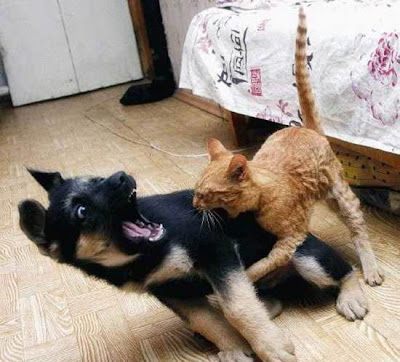 HPD received $21,850.23 from an anonymous donation and used additional federal and state grants along with money from drug seizures to open the program today, April 1, 2011. The entire cost, which included training in Oklahoma, is about $68,231.25.

The three sworn and trained C-A-T’s are trained to sniff out narcotics, similar to the instinct they already have bred into them of sniffing out cat-nip, attack based on a trainer's command and carry out other useful techniques.

Officer McCoy said they hope to add a fourth cat in the near future for full-time canine (K-9) assistance, although that may take some additional training due to the current dogs jealousies.

Tuffy and his fellow C-A-T’s already have helped officers find narcotics. Last week during a trial run, McCoy said the C-A-T’s sniffed out illegal narcotics and a crack pipe that their human coworkers might have missed without them. However, tragedy struck as one of the C-A-T’s went missing after a pigeon landed nearby.

"When Tuffy is close to the drugs, he'll indicate by purring very loudly, and he'll roll on his back," McCoy said.

Off-duty, Tuffy is a completely different cat. "He runs the house," McCoy said. "He'll just lie around, but when he sees his handler getting his uniform on, he starts going in circles, meowing incessantly and runs to the door. It's a big game to him."

As long as the crooks don’t have a feather tied to a stick or a ball of yarn, we feel that this could be a very successful program.

Have a great April 1st everyone...

You had me for one minute...I was thinkig WTH???? Then I realized that it was April Fools day. Great one!!!!

God this is hilarious