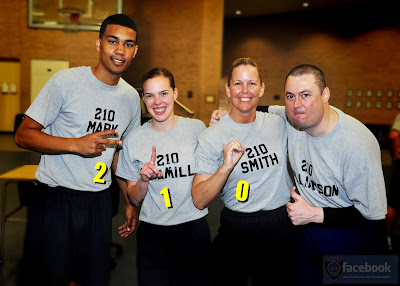 Cadet Mark WHEW!!!! What a whirl wind. If week one is any indication of what's to come, these next six months are going to be some of the most challenging, yet rewarding months of my life. Policing is NOT for the faint of heart! That becomes more and more apparent everyday. The class is already starting to come together and learning when to lead and when to be led. As for myself, I'm trying to soak in every minute. If standing in a room greeting Chief McClelland and other highly decorated HPD officers and hearing their expectations for you doesn't get you motivated, it’s safe to say not much will. These are mighty big shoes I'm trying to fill, but I know with the help, teachings, and encouragement by the training officers, we are bound to have a great class. For 209 it was "time to shine", but for 210, its one step, one day at a time until it’s our time.

Cadet Gemmill Well this was my first week and I can’t lie to anyone and say I wasn’t overwhelmed, because I was! I had to keep myself from grinning like a fool and looking goofy from all my excitement. I never really thought I would have the chance to meet Houston’s own police chief, Chief McClelland, but on our first day he came in and gave us a little pep talk . . . along with Assistant Chief Edwards and many other officers. I came into my first day intimidated, stressed, and overwhelmed. Many cadets and I had talked about how we had hardly slept the night before, and if we had slept any that we had nightmares about being late. Needless to say I got adequate sleep that night due to the minute amount I received the night before and from the ease that had settled in after listening to so many officers talk to us. For me, being a police officer is a calling… and like many other officers have told us in our two orientations and first day of class, being a police officer is rewarding and they couldn’t imagine doing anything else. I’m looking forward to graduating this academy in 6 months and feeling the same sense of belonging they feel as a police officer. Our first day consisted not only of speeches and warnings but also more paper work (lol), we even practiced drills and learned to manage our stress as a police officer. PS: I’m still intimidated, but that’s what will keep me going!

Cadet Smith The first week for Class 210 has ended and we ALL SURVIVED! I don’t even know where to start…roll call, marching, lectures, books, tests, inspections, and let’s not forget, the PAT Test. This past week was great. I feel Class 210 has really come together as a team quickly as everyone is helping out each other. Our L1 and L2 are awesome and all the instructors keep you interested with stories and their own experiences. Our military guys have really stepped up to the plate teaching the class how to march and stay in formation. I wasn’t nervous this past week until Friday when our physical abilities were put to the test. It was pretty demanding to say the least, but the instructors were nothing short of encouraging. I know things are about to ramp up as we start learning the law and we will have to juggle that information along with many other classes and PT. I have always enjoyed a challenge and I have to say this is my biggest challenge yet. I have set personal goals for myself, both academically and physically and I intend to see that I achieve them.

Cadet Williamson One week down, twenty seven more to go! After training for six months at a private academy, you'd think starting a new academy wouldn't be so hard. Being that this is the HPD Academy, though, there's nothing easy about it. Right out of the gate, we were flooded with information, rules, classes and homework. We drill daily, practicing the military style ceremonial formations that are fun to watch, but hard to do. Our days start before sunrise and end with just enough sunlight to get home. There is a constant fear for each cadet that something is being forgotten or messed up. We learned very quickly that a small mistake by any cadet can mean push ups or other punishment for the whole class. There are no individuals in the HPD Academy. We are trained to function as a single unit, so a mistake by one cadet is a mistake by all. There is no room for error, as the instructors (who are all seasoned HPD veterans of course) demand discipline, professionalism, and strength from each cadet. They know it's the tiniest of mistakes that can lead to loss of life in the real world. The week ended with PT exercises starting bright and early at 0700 hours (7am) Friday. Throughout the course of the next several hours, we were tested in our first of three critical Physical Agility Tests (PAT's). The test includes an Agility Run, Push-Ups, High Jump, 300 Meter Sprint, and 1.5 Mile Run. There are minimum standards for each test, and a failure on any test means remedial training for that event. Remedial training is extra work that can involve coming in early before the day starts and working out, so the stakes are high. I nearly failed the agility run. When they were telling us the instructions, which included sprinting to one end of the course and back, being sure to step across a line, I thought "Of COURSE you step past the line. What idiot would miss the line?" Yeah. It was me. I was disqualified on my first run, but was able to pass on the second time through. I was also able to pass the other events with decent times. Not GREAT times, but decent. They'll be great times by the end of the academy, I can guarantee that. The instructors will accept nothing less than complete and total commitment from each cadet, as they demonstrated when they made sure the physical training kicked into overdrive after the PAT was finished. I won't go into detail about what exactly went down (it was a complete shock to us, and is probably meant to be that way for future classes), but let's just say that Class 210 will definitely still be feeling it for the next several days! In the coming weeks, we will be electing a President, Vice President, Secretary, and Treasurer. I signed up to run for president. The sign up list for the positions is quite full. Given that nearly everyone in the class holds a stack of degrees in law enforcement related studies or is prior military, winning an elected position in this class will not be an easy thing. In just a single week, everyone in the class has shown the heart, dedication, and commitment of a leader, so I know Class 210 is in great hands no matter who wins the positions!

When is the next update? These are great!

Keep it up 210, we need you out here. When that white shirt turns to blue it will ALL be worth it!

Thanks, guys and gals! Keep up the good work, we need you!