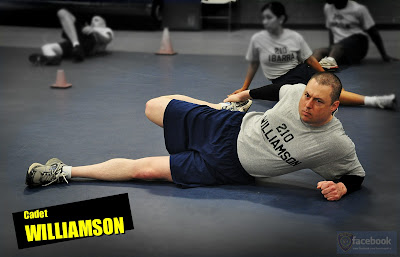 What an eventful first month! Our first Primary Exam kicked our butts. Several of us did not do as well as we'd hoped, leaving seven cadets in a failing position. They were given another chance to take the test later that week. When it was announced that they had all passed with A's, the class roared with cheer. It was an eye-opening moment for the class as we realized how much we cared for each other. We may have only known one other for a few weeks, but the bond was already very strong.

While I didn't earn the top score in the class on our first Primary Exam, I did recently run for a class office. The class voted for President, Vice President, Secretary, and Treasurer. The candidates were all very capable of doing a fantastic job in the positions they sought, and it was a shame we couldn't all win. I was fortunate to be voted in as Class President. Sadly, the job doesn't come with a limousine or scary looking Secret Service agents, but it is a great opportunity to support my fellow cadets in creative new ways in the coming months. We've already got some great plans and are working together on strategies to implement them.

Currently, we're designing our Class Flag which will hang overhead in the gymnasium with the flags of the classes that came before us. It may incorporate our newly minted motto, "Class 210, Serve and Defend!" (Pending final approval from Chain of Command.) Before we Serve And Defend, though, we'll need to focus our efforts on passing this next Primary Exam. I know this one will be tough, but I also know how hard we've all been working in preparation for it. I have every confidence that Class 210 is going to shine on this one!
at 8:48 AM

Congrats on Class President and for getting through that first primary! Keep up the great work. The badge is worth every sacrifice!

Great job, thanks for the update and congrats Mr. President.