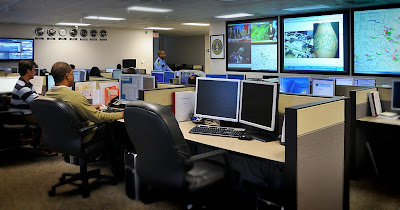 Recently, CIA Baker observed a double homicide call where a suspect had just murdered his wife and teenage daughter. The only other information available was a possible suspect’s name, and that he was last seen driving a blue truck with a small child onboard.

CIA Baker began to immediately analyze the information regarding this horrible incident to see if he could contribute to the suspect’s apprehension. A partial license plate number was retrieved from the original call and with this minimal amount of information,

CIA Baker jumped into action using his analytical skills to tap into a variety of databases available to him in the Real Time Crime Center (RTCC). After a thorough query of the RTCC databases, CIA Baker not only identified the full license plate number, he provided the make, model and color of the suspect’s vehicle. Furthermore, he was able to identify who the possible suspect was in this case.

As the suspect was making his get away the information that CIA Baker discovered was used to contact OnStar (OnStar Corporation is a subsidiary of GM that provides subscription-based communications on vehicles which include navigation and vehicle location.) OnStar was able to track the vehicle to a Wal-Mart where assisting law enforcement agencies were able catch up with him within two hours of the double homicide. The suspect was arrested without incident and the suspect’s son was recovered unharmed.

As a result of CIA Baker’s attention to duty, timely response, diligence and cooperative efforts, this extremely dangerous person was arrested and taken into custody before he could make his escape. It is with great pride that we commend CIA Baker for his efforts.
at 9:49 AM

Man, that's crazy. Surprised that Onstar worked that quick! If I am not misunderstood they could have also shut the vehicle off for law enforcement if necessary.

That is truly amazing! This officer's drive and intelligence, coupled with the latest in technology are the stuff movies are made of! Being REAL just makes it so much cooler. Outstanding job, CIA Baker!