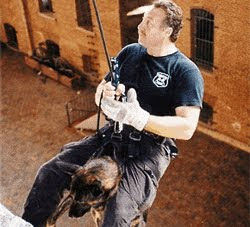 Falco, a two-year-old Dutch shepherd, took to the streets last April Fool's Day as Houston PD's newest tactical K9. If he knew what was in store for him, he might not have been so enthusiastic about donning the Kevlar vest.

K9 Storm's vest is constructed with a load-bearing harness system allowing the dog to wear the vest comfortably for tracking, searches, and rappelling. The handler connects his carabiner to a "V" ring on the back of the vest to secure the K9 for rappel operations.

First time over the wall, Falco went willingly. By the third time, the dog wasn't as happy about having his feet off the ground and a small protest ensued. With patience, Officer Gage coaxed Falco into action. Falco was selected as a tactical dog after a long search. A different personality and temperament is required in a SWAT/tactical K9 as compared to patrol K9s. The dog must be aggressive yet stable and sociable.

Tactical dogs must respond to non-verbal commands, such as pointing, and obey commands from more than one officer while determining the difference between officers and suspects. The dog must be comfortable around automatic rifle fire as well as the unique movements of a SWAT officer.

Barbara A. Schwartz is a Houston-based police writer.
at 9:45 AM No comments:

Traffic Stop Yields a Lot More Than Heads of Lettuce 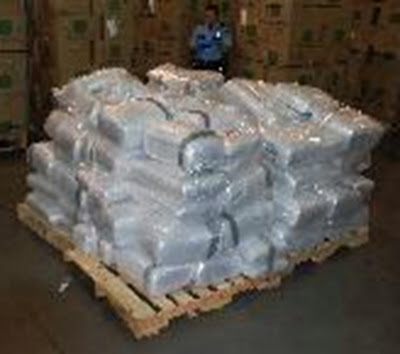 A routine traffic stop and truck inspection by a Houston police officer last Sunday night of an 18-wheeler supposedly carrying just a load of lettuce resulted in a large drug bust with nearly one ton of marijuana on board.

The seizure of 1,995 pounds of marijuana led to the arrest of the truck's driver and lone occupant.

The seized marijuana was packed in numerous bundles and has an estimated street value of $3.1 million dollars.

Other boxes on the truck were filled with lettuce (street value, twenty-one bucks or so...)

Click Play Above - video courtesy of the Houston Chronicle (www.chron.com)

Tony Morris, a photographer who was on assignment for Houston Style Magazine, suddenly collapsed during the conference and stopped breathing.

Chief McClelland rushed over and kneeled beside Mr. Morris and began compressing his chest.

"I saw him actually begin to slide down the wall and when he fell, he laid flat on the floor," the police chief said. "When I went over, he did appear to be seizing. His jaws were clenched and his eyes were open completely wide."

"Then he stopped breathing and his eyes seemed like they began to glaze over and that's when I knew I had to begin CPR," the chief said. "He came around. His breathing was labored, but he did come back after around two minutes of chest compressions. It was very, very scary. I thought we had lost him."

Chief McClelland said he did what any other police officer would have done in the same situation.
"I hope they understand that besides these four stars on my shoulder and just being a Houston police chief, I'm a human being," Chief McClelland said. “I'm no different than any dedicated cop. I'm one of the 5,300 officers who would be willing to lay down my life to save somebody else's."

Video courtesy of the Houston Chronicle. For more on the story and other news events, please visit chron.com
at 8:51 AM 2 comments: 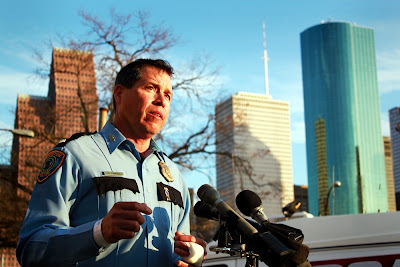 When Houston Police Department Lieutenant Harry Zamora saw the Cadillac engulfed in flames on the inside shoulder of the Southwest Freeway, he knew he had to act. He was not alone; at least eight citizens, seeing a motorist trapped in the burning car, had already stopped and were lifting the vehicle away from the guard wall so Lt. Zamora could open the door.

"I ran up and pulled the door open and we got him out," said Lt. Zamora, who suffered second degree burns. "The heat was intense, there were pieces of the car that were popping and flying. We thought the vehicle was going to explode."

The 73-year-old man was severely burned. He was rushed to Memorial Hermann Hospital in critical condition, but Lt. Zamora knows if not for those nameless strangers who stopped to help, the man would have perished on the freeway.

"The people who came together, who lifted the front of that car are the true heroes," said Lt. Zamora. "I was just doing what I'm paid to do. I'm a policeman, we're out here trying to do the right thing and help people. I just did what anyone else would have done," he added.

Lt. Zamora added one more heartfelt message for those good samaritans who helped.

"Thank you Houstonians for coming to that man's aid. God bless you, because you did the right thing."

HPD would like to commend the heroic actions of Lieutenant Zamora and the citizens who came together yesterday to help save a life.See More
at 8:14 AM 3 comments: 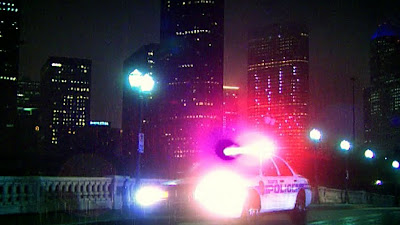 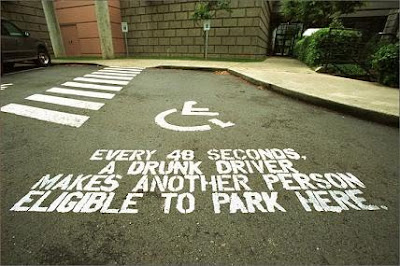 Officer J. Roberts is a member of the Traffic Enforcement’s DWI Task Force and is a certified expert in the administration and interpretation of the National Highway Traffic and Safety Administration’s Standardized Field Sobriety Tests as well as a certified Drug Recognition Expert (DRE).

Over the course of calendar year 2010, Officer Roberts conducted 377 Driving While Intoxicated (DWI) investigations, with a total of 373 county charges for DWI related offenses, including misdemeanor and felony DWI, Intoxication Assault, and Intoxication Manslaughter. Officer Roberts also conducted 24 DRE evaluations. These evaluations encompassed his own self initiated investigations as well as assisting other officers from the Houston Police Department and other agencies. Officer Roberts was the top producer of DWI related arrests for the DWI Task Force and the entirety of Harris County.

Officer Robert’s dedication to the mission of the DWI Task Force brings great credit upon himself, the Traffic Enforcement Division, the North Patrol Command and the Houston Police Department.
at 7:47 AM 3 comments: 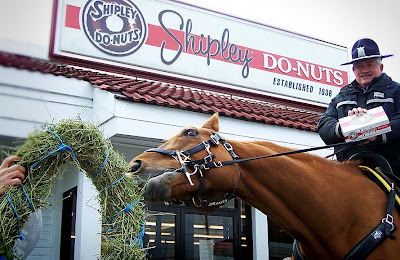 Even "Brando" needs a treat every now and then.

It's not Mayberry anymore...

Although this incident did not happen in Houston, it is important to know that this career can get very serious, very fast, at any given time.

The North Hollywood shootout was an armed confrontation between two heavily armed bank robbers and officers of the Los Angeles Police Department (LAPD) in the North Hollywood district of Los Angeles on February 28, 1997. Both perpetrators were killed, eleven police officers and seven civilians were injured, and numerous vehicles and other property were damaged or destroyed by the nearly 2,000 rounds of ammunition fired by the perpetrators and the police. 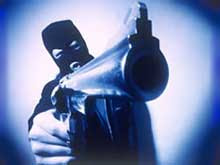 Recently while on patrol Officer T. Goemans observed two males pulling ski masks over their faces and proceed inside a Walgreens store.

A couple of days later, Officer Goemans, not giving up on the first suspect, made contact with an owner of a business close to the Walgreens that had been robbed. Officer Goemans was able to ascertain that this business had a surveillance camera and that it may have recorded the robbery suspect’s vehicle, as well as the suspects themselves.

Officer Goemans reviewed the surveillance tape and determined that it indeed had recorded the two robbery suspects just prior to the robbery attempt. Officer Goemans was able to get a description of the vehicle, the license plate number, and a possible third suspect who appeared to be the get away driver and lookout.

Due to the quick response by Officer Goemans, and his follow up investigation, one Aggravated Robbery suspect was arrested and the other two will more than likely be captured very soon.

HPD would like to commend the heroic actions of Officer Goemans for his exemplary police work. Due to his awareness and attention to duty, these armed and dangerous suspects were stopped from harming and possibly killing innocent victims. 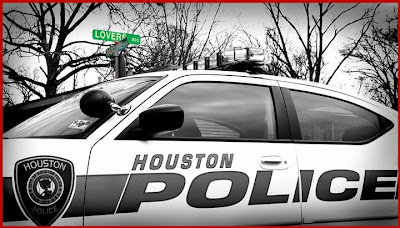 Houston has a street called Lovers Lane, who knew?
If this post today can remind just one person not to forget their loved one today, it has done it's job.
at 6:33 AM 2 comments: 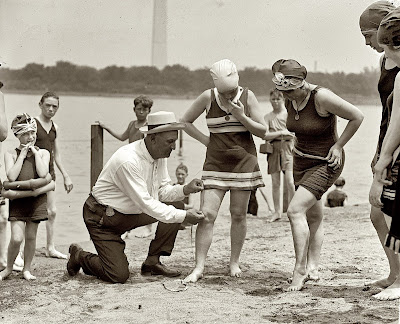 June 30, 1922, Washington policeman Bill Norton measuring the distance between knee and suit at the Tidal Basin bathing beach after Col. Sherrill, Superintendent of Public Buildings and Grounds, issued an order that suits not be over six inches above the knee.

"The Cop Who Wouldn't Quit"