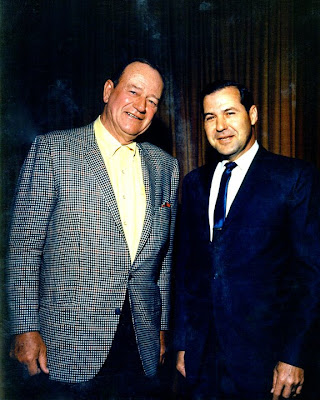 With the remake of the movie "True Grit" garnering rave reviews and Oscar nominations, I bring you a photo from the HPD Museum archives from 1968.

This photo depicts the original True Grit star, John Wayne, posing with HPD Chief of Police Herman Short. John Wayne was filming the movie “Hellfighters” in the Houston area during the time he visited with Chief Short. Chief Short, who lived in Houston, was a member of the city's Police Department for nearly 30 years and became chief in 1964. In the 10 years he served in that post, Chief Short won support for his tough law-and-order stance.
at 1:50 PM

You have to have true grit to be a police officer that's for sure...

Pretty snazzy find here. interesting.....haven't seen the movie yet though

First off, a little known section of the penal code states "it is a felony of the 3rd degree to remake, recast, update, or attempt any of the previously stated actions of anything that has ever had anything to do with John Wayne"

that might be an actual amendment to the US Constitution too,