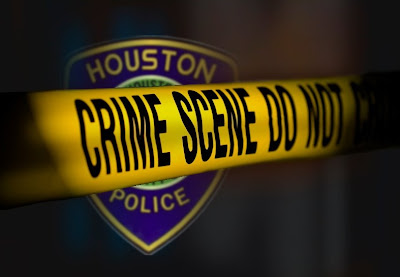 One night back in October, Officer R.Estrada and his partner were dispatched to a shooting at an apartment complex where a victim had been killed. Upon their arrival, they observed two males running from near the scene of the shooting. Officer Estrada and his partner chased the males on foot, securing one of them after... a brief pursuit. During the chase, the suspect who was apprehended, had thrown a handgun into the bushes near the shooting scene. The suspect was charged with Unlawfully Carrying a Weapon and Evading Arrest, but due to the proximity and nature of his actions, they listed him as a suspect in the murder case.

Homicide detectives sent the suspects pistol for ballistic testing to help determine if he may have been the shooter in this incident.

The following night, Officer Estrada received a call to check by on another shooting that occurred in his patrol area where the victim also died. Other patrol officers arrived on the scene and provided a description of the shooter and his vehicle.

Officer Estrada located a handgun hidden under the rear seat of the vehicle and noted blood spatter on the suspect’s clothing. This suspect was detained for Homicide detectives for follow-up investigation.

It was later determined that the arrested suspect was driving a vehicle that was taken in a robbery earlier in the night, and he was charged with Aggravated Robbery, pending the outcome of the capital murder investigation.

As the result of his quick response, determination and attention to duty, Officer R. Estrada was involved in the arrest of two suspects, which are likely involved in each of these murders. These dangerous suspects have been taken off the streets and are awaiting for the conclusion of the respective murder investigations. Due to Officer Estrada’s actions in these incidents, HPD would like to commend him for a job well done.
at 2:00 PM

Wow! Way to go Officer Estrada! Thanks to hard working folks like you, we're able to sleep better at night. Thank you for your service. I'm sure the detectives are thankful as well!