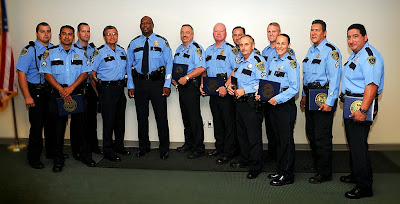 Citizens in Hyde Park and East Montrose communities had expressed concerns regarding a rash of residential and motor vehicle burglaries in their neighborhoods. Sergeant R. Wilson initiated a program that educated the residents and helped them avoid becoming victims of crimes. Sergeant Wilson and his officers contacted over 700 households in the East Montrose and Hyde Park communities and spoke to over 160 residents, advising them of how to secure their property, to call the police about suspicious behavior, and to participate in Operation ID.

Sergeant Wilson and Officer W. Pate met with various community members on several occasions to hear their concerns and provided assurance on the department’s efforts to solve the crimes. However, the crime spree continued and evidence suggested that the crimes were being committed by serial offenders.

In October of 2010, Officer J. Obenhaus was on patrol and heard a burglary in progress call one block from his location. He noticed a possible suspect fitting the description walking quickly from the scene. Officer Obenhaus caught the suspect a few blocks away and found him with stolen property. The Crime Analysis Unit completed an audit of the burglaries in the Hyde Park neighborhood and their research indicated that over 100 burglaries might be attributed to this suspect.

During the same week, a witness saw a suspect breaking in to his neighbor’s house and yelled at him to stop but the suspect fled on foot. Patrol officers arrived and were able to capture the suspect. It is believed that this suspect may have committed over 50 burglaries in the East Montrose neighborhood.

Also in October, Officer G. Mcilvain was flagged down by a security guard regarding a suspicious vehicle believed to be responsible for a rash of motor vehicle burglaries in the area. Upon locating the vehicle he attempted to conduct a traffic stop but the vehicle fled. A chase ensued, ending when the vehicle crashed and the suspects bailed out. They jumped into a bayou and used the bushes to hide but they were located and arrested by Officers L. Laureano and
O. Maldonado. A subsequent investigation uncovered a substantial amount of stolen property, resulting in the suspects being charged with several crimes.

As a result of the hard work, dedicated attention and perseverance of all these officers, four prolific thieves were arrested and charged with various crimes and a successful resolution to a troubling crime pattern was achieved.
at 10:41 AM