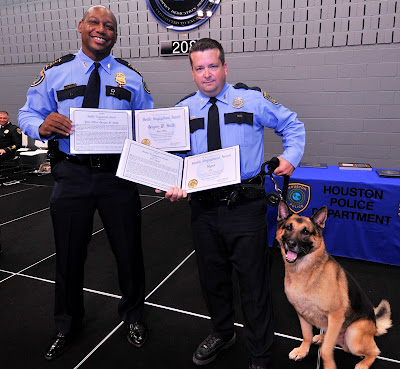 Officer Greg Smith and his K-9 partner “Alpos” responded to a burglary of a residence and noticed the suspect exiting through the broken window of the home. After verbal commands toward the suspect to get on the ground were ignored, Officer Smith released Alpos to gain control of the suspect.

Officer Smith moved in to assist Alpos and took the suspect to the ground when he noticed that the suspect was holding a screwdriver. The suspect not only stabbed Alpos but also stabbed Officer Smith in his chest, cutting through his uniform shirt, but was stopped by his bulletproof vest. The suspect continued struggling with Officer Smith and again attempted to stab him. Fearing for his life, Officer Smith removed his duty weapon and fired one shot at the suspect, fatally striking him.

Alpos was treated by a veterinarian and after some healing time, made a full recovery.

Officer Smith and Alpos were recently awarded the Hostile Engagement Award by the Chief of Police, Charles A. McClelland Jr.
at 6:58 AM

I think Alpos wanted to hold his award. Great Job!!!!

Glad you both are safe.