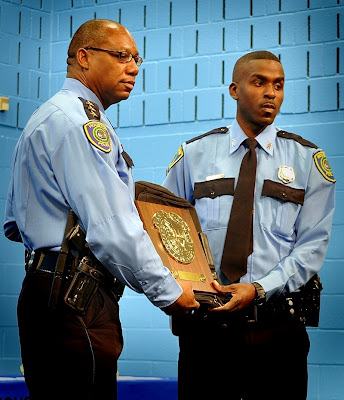 On August 12, 2007, at approximately 0500 hours, Officer Kwami Ahiabor, of the Southwest Division, was returning home from work when he onviewed a suspect trying to break into a vehicle in the apartment complex parking garage where he lives and provides security. Officer Ahiabor was wearing his his police uniform along with his vest at the time. He attempted to arrest the suspect but the suspect did not comply. The suspect began to run away from Officer Ahiabor. Officer Ahiabor gave chase through the parking lot in an attempt to apprehend the suspect. The suspect rounded a parked vehicle drew a .44 caliber weapon and fired twice at Officer Ahiabor. Officer Ahiabor was struck on the right side of his ribcage, just below his right pectoral muscle. Investigators were able to identify the suspect. He was arrested and charged with aggravated assault of a police officer. Ultimately, the investigation revealed that Officer Ahiabor's Level II body armor stopped the suspects .44 caliber projectile and prevented him from sustaining serious bodily injury.
at 8:17 AM

.44 cal is no joke. Thank God officer Ahiabor was wearing his vest!

I wondered why we were setting up so many chairs yesterday!

I'm sure glad he was wearing his vest!

They should have filed attempted murder on that guy. What a turd! Just think if he had removed it after his shift. Stay safe, it's a jungle out there.

Great Job Officer Ahiabor ! Too bad not all officers wear this all too important tool provided by the city...