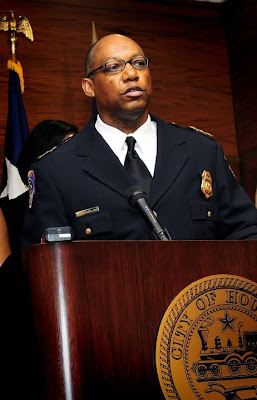 Mayor Annise Parker has just made it official and has sworn in Charles McClelland Jr. as Houston's newest Chief of Police.

Charles McClelland Jr. has dedicated his career to public safety and criminal justice. He has served over thirty-two years with the Houston Police Department. Chief McClelland rose through the ranks during his thirty-two year career beginning as a patrol officer in 1977. He was promoted to the department’s command staff in 1998, and his management experience has touched virtually every aspect of law enforcement throughout his career with the Houston Police Department.

Chief McClelland holds a Bachelor of Science degree in Criminology and a Master of Arts degree in Sociology. He is also a graduate of the Federal Bureau of Investigations National Academy and has received numerous awards and commendations.

Chief McClelland is a proponent of community based policing. His managerial experience and training has allowed him to work with various government officials and business leaders in developing crime prevention strategies and promoting a safe environment in diverse communities throughout the city.

He has two daughters, Ashley and Brittany.
at 9:14 AM