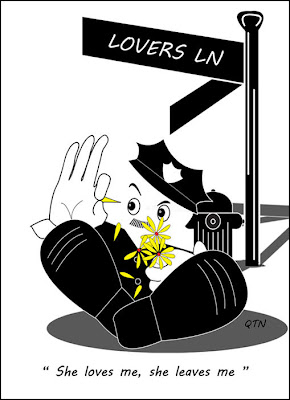 One of our HPD officers is very talented and creative and has graciously designed this cartoon for the blog to celebrate Valentines Day. I would like to personally thank Officer Tuan Nguyen for his contributions today and in the past. Officer Nguyen began his career as a civilian photographer with HPD and wanted to do more for the community after being around fellow police officers and seeing what the job entailed . Officer Nguyen joined HPD as a police officer two years ago and tells me he loves patrolling the night shift in downtown Houston and wished that he had done it sooner.

Officer Nguyen's story is one of many. From school teachers, professional basketball, football and baseball players, airline pilots, doctors, to graphic artists like Officer Nguyen, there is something calling these citizens to make a difference in their community. There is nothing like being a police officer and making a difference everyday. I say to Officer Nguyen and the readers of this blog, it's better later than never. Apply today at www.hpdcareer.com .
at 8:06 AM

Inspiring story. I hope you guys get more classes in the future so I can make a difference soon. Love the design Officer Nguyen. I read this blog everyday and it makes me want this career more than anything.

This is a very cool post today. Love the story about the photographer becoming HPD. Great job on the picture sir.

She loves me, SHE LEAVES ME>>>Funny!

I read the blog everyday and it keeps me inspiried!! Keep up the GREAT work!!

Add unemployed corporate middle manager to the list. The more I read about police work, the more it interests me.

Mike, Love the site...keep rolling out that series.

Hey Mike,
I met Nguyen when he was in the photo lab producing amazing photos that were going up at my station. I left patrol and went to the recruiting unit, and I would go work the streets for officers needing off from time to time. Well we all know what a small world we live in. I worked for a trainer, so I trained that trainers partner for the day. Officer Nguyen. I was very impressed by him. We arrested a parole violator and he was very professional and did a great search of the suspect. He followed it up with a great report. So, to anyone out there waiting. Remember you only reach your goals when you step towards them. STAND UP!