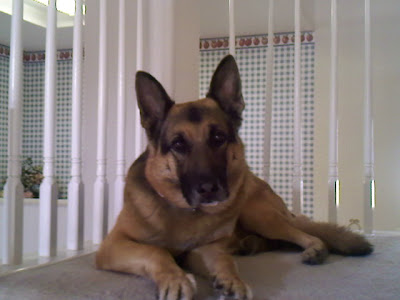 Hello everyone, my name is Alpos. I work for the HPD K-9 detail and Officer McCoy was nice enough to let me share a true police story with you today. I love this job and I think you will too.

I received a call for a forgery in progress the other day. I arrived and found a "man hunt" taking place. It turns out that an officer was dispatched to this call and when he arrived he learned that two bad guys were attempting to cash a stolen check. One of the officers approached them while they were trying to leave, the driver sprayed the officer in the face with pepper spray! The officer fell to the ground hitting his head on a curb. Then the bad guy ran away. The second suspect surrendered to the arriving officers. I began to search for the bad guy who had run away, who everyone believed was long gone. I never give up that easily. I picked up the guy's scent in a large parking lot that contained several cars. I came across the bad guy's lost shoe and chewed it up...now it's personal. The wind was out of the southeast and I could smell the bad guy. He was close. My partner and I began to check all the parked cars in the parking lot. We figured he was hiding under one of them. All of the sudden I caught the bad guy's odor (sort of like molded cheese) about seventy yards away in a dumpster. I pulled my partner like crazy toward the dumpster, jumped on the side of it and began barking. My partner ordered the suspect out of the dumpster. He gave up and was taken to jail. By the way, the officer that hit his head on the curb is going to be alright. I gave him a lick.
at 8:43 AM

Very clever. I love the dogs perspective. Love this blog!

Any News on any more classes in 2010 i applied awhile ago an have not herd anything back. Anything i should do now or know? Thanks