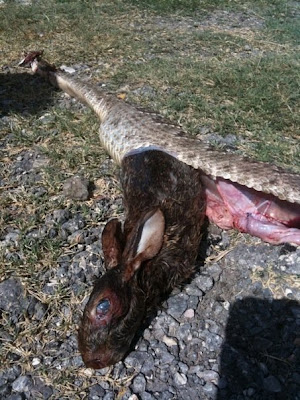 A fellow officer sent me this picture of a rattlesnake that was killed in the backyard of someones home. Four small children were playing in the yard when the snake was spotted and the police were called. The officer had to shoot the snake in the head. This took place in a small town off of Highway 290 near Austin. It seems that during the major drought they had this summer the snakes were coming into the yards looking for water. I have been a police officer for almost 28 years now and I have never heard of, or had to deal with a rattlesnake as a Houston cop. However, I have dealt with some really BIG Texas roaches. Which is better? You tell me.
at 7:00 AM

Your blog is like a box of chocalates, you never know what you are gonna get....except a nice laugh. Love it!

Awesome, but poor rabbit...poor little guy...that is one big Rattler. I hope I never get a call like that when I become a police officer...

A cop has taken perfect decision by killing that snake.The rabbit was very unlucky that it was became food of that snake.It is good news that no child was harmed.

Niether is better.. Im so scared of both..lol...But i guess if i had to choose yeah roaches

This is the best blog I have ever read thank you!