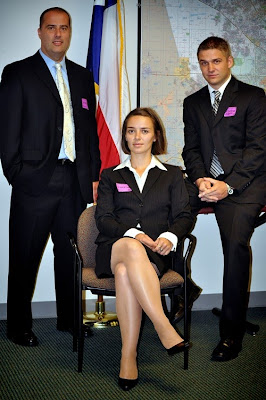 June 22, 2009 is fast approaching and Academy Class 207 had it's orientation this past Saturday. I came across an interesting fact about Academy Class 207. Not just one, but three class members speak and write fluent Russian. Throughout the years we have had Russian speaking cadets, but very far and few between. The odds of having three in the same class are incredible.

Sasha Gajic grew up in Croatia (part of former Yugoslavia) and came to the United States in 1997 to attend college. He speaks fluent Russian and English. His dream was to become a police officer since he was a young boy. Once he became a United States Citizen, he decided to make that dream come true.

Svetlana Menefee was born in the former Soviet Union Republic, Belarus. Both of her grandfathers fought during World War Two; her grandmother was a military nurse and her uncle worked as a police officer. She arrived in the United States in 2000 to attend college and study English. She learned to speak and write speak English in her first year here. She received her Bachelors Degree in Biology from the University of Houston. Once she became a citizen of the United States she thought she would follow in her uncle’s footsteps and become a police officer with HPD. Although she already knows how to speak Russian and English, she feels it is important to learn Spanish to be a police officer in Houston and is currently learning the language. She now considers herself a Houstonian and loves this city.

Alex Vinogradov was born in Moscow, Russia and moved to Houston with his twin brother and parents when he was ten years old. He grew up in the Clear Lake area and graduated from Clear Lake High School. He graduated from the University of Texas in 2009. He is bilingual in Russian and English. He told me that he is looking forward to starting his career with HPD and plans to make it a career.
at 9:33 AM

What are the chances that more classes will be added after june acadamy. I was very disappointed about the recent changes to the academy dates. I worked so hard physicaly to get in shape.

We are all keeping our fingers crossed. Stay positive. Right now I do not have your answer and do not want to guess.

One of the previous blogs had a comment from someone saying that you are not processing out of town applicants anymore. Is that true and is so does that apply to anyone who lives outside of Houston or just out of state?

We are putting a hold on out of state applicant's until we have a better direction on whether or not more classes will be funded.

Great story. That is great for the Russian community. My nieghbor is Russian and I showed him your blog. He was very happy.

I love the picture!