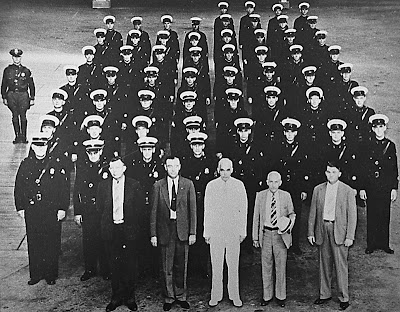 Courtesy of the HPD Museum

This photo is of the first formal Houston Police Department cadet class known as the "Class of '39." The Class of '39 graduated on August 16, 1939 and was under the direction of Captain L.D. Morrison. The academy was five weeks in length. They were instructed in Authority of the Police, Arrest Search and Seizure, First Aide, English Composition and Grammar, Firearms, Physical Agility, and Geography of Houston: Streets, Hospitals and Landmarks. Class numbers were not given out until 1948 when Academy Class Number One (1) was introduced.

Isn't it time you became part of a long standing and proud tradition? Apply today and start making some history of your own.

I just wanted to take a minute to compliment you on the recruiting blog. I have already completed the application process, and the background investigation is underway. But my professional background is in radio and television news reporting--and I have to say, the quality of the videos and columns you post is top notch! The blog helps to answer questions and address the concerns that those of us hoping to enter the academy (Especially those of us making the transition from another career) have. Keep up the good work, and I look forward to meeting you.

when did you start your application process Aaron?

I interviewed the week of March 17th--but because I came in from out of town, the entire application, psych evaluation, polygraph, PT test, etc. were done at the same time. The background investigation is underway right now, and I hope to be included in the June class.
-Aaron

I too believe that this is a AWESOME Blog. I look forward to seeing it everyday. My brother is a HPD Officer and was in class 185. I hope to be in class 207. I've completed my application process, done the polygraph, and now they are doing my background investigation. I got to admit, "It's a long process" but it's worth waiting for. Looking at the picture of the Classes standing in front of the fountain, I can see myself staninding there next month. I can't wait!!

Hey guys, I am in class 206 and I'm loving every minute of it. I can tell you that it is worth waiting for. Believe me, I can't wait to have the next class start in June. Then the attention can be directed to the next "baby class". If you look close enough you can see me on the far right. Well, maybe not... Good luck!!!