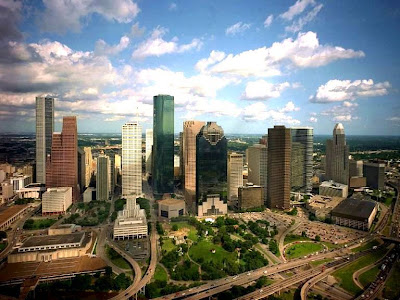 Kiplinger.com (2008) voted Houston the number one city in America to live. The following article is courtesy of Jane Bennett Clark (http://www.kiplinger.com/)

After you read the article, check out some of the "My Houston" spots on past posts.

It's the city of big plans and no rules, beat-the-heat tunnels and loop-the-loop highways, world-class museums and wiry cowboys, humidity that demands an ice-cold martini and the biggest darn liquor store on the planet. How could you not love Houston?

You can hardly afford not to. Back with a roar after the oil bust of the 1980s, Houston has reclaimed its title as energy capital of the U.S. and added aerospace, technology and medical companies to the mix, generating more than 100,000 jobs in 2007. Not only does the Houston metro area lead the nation in job growth, but also its cost of living stands well below the national average. Housing prices run half those of other metro areas its size.

Houston's comeback didn't happen by accident. "Before the energy business returned, the city made the wise decision to invest in its downtown," says Guy Hagstette, who directs Discovery Green, a new 12-acre park in central Houston. Upgrades include an expanded convention center, a new stadium, a spiffed-up Main Street and a light-rail system.

Those improvements attracted couples and empty nesters, as well as Fortune 500 companies. Laura Van Ness, business director of Central Houston Inc., exchanged her 4,400-square-foot suburban house a few years ago for a condo within shouting distance of Houston's museums, theaters, sports venues and restaurants (and Spec's, the world's largest liquor store). She walks to work -- ducking into the pedestrian tunnels on steamy days -- and comes home to a building with a rooftop pool and spectacular views of the skyline. She could cook, but she doesn't. "When I have a party, I take my platter to the Four Seasons Hotel and have them put appetizers on it."

Attention Fellow Addicted HPD Blog Readers - Your Vote Counts...
As one of those who faithfully has found this blog informative and tremendously helpful, I nominated Officer McCoy and the HPD Recruiting Blog for the Blogger's Choice Award. I have enjoyed reading all the informative updates and videos that Officer McCoy faithfully puts out there for all of us to read and learn from - and from your Blog comments - I believe many of you have too.

As the mother of a recent Academy graduate, the blog helps me understand why being in law enforcement means so much to my son and what his job entails. For many of you 'future and current recruits' I know this blog really helps you with the decision on whether law enforcement is the right job choice for you. For those who have decided it is the right choice, this blog helps guide you through the application process and gives you information on what to expect during your time at the academy and how you can best prepare yourself before you arrive.

I believe we all agree Officer McCoy puts his heart and soul into this Blog - lets show him how much this means to us and go to the Blogger's Choice Award website (there is a quick link hiding under Santa's beard right now to get you there) and cast your vote for hpdcareer.blogspot.com to be the 'Best Marketing Blog' in 2009. Thanks and Happy Holidays to all, Officer Herb's Mom

Wow, Mrs. Herb...thank you very much. It is very easy to make HPD shine. Your son is one of the latest and greatest to join our ranks. I must tell you, from all I have heard he is a true policeman and seems to love his job. Thank you for the support and the kind words.

I wanted to thank you for the nice comments. Although my exposure to him has been limited, your son Michael Herb has been a joy to work with. His enthusiasm and pride are unmeasured. This is indeed a famiy. Thank you for sharing him with us!

I agree 100% that this blog is the best around. I voted for it yesterday and I encourage everyone to do the same. I have never seen a blog with more heart and soul in it than this one. Officer McCoy really cares about it and makes more than an effort to keep it alive, informative, serious, funny, creative and, best of all - THE VERY BEST THAT IT CAN BE!!!

I just voted for the HPD blog..!

Thanks again, HPD is the "real thing" and I love to talk about it. I appreciate all the nice comments.

Wow! Houston sounds like a nice place to live. Columbus is known for our outstanding library system, which is right up my alley.

You know, Houston really is a great place to live. I have lived here for 12 years and still love it. The best part is not getting snowed in for months at a time. The city is so spread out and it is easy to get around. Love the blog by the way...