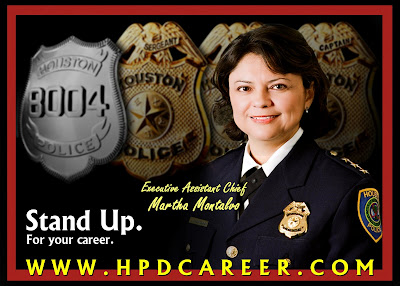 Executive Assistant Chief Martha Montalvo was originally born in Ecuador, South America. She immigrated with her family to Houston, Texas in 1963. She was raised on the east side of town, in the Canal/Navigation area. At the age of 18 she made the decision to become a citizen of the United States, as this was her home and country of choice. She entered the Police Academy in January of 1980 and will have 29 years with HPD in May of 2009. Her current title is Executive Assistant Chief and she is responsible for Administrative Operations. This Command includes Internal Affairs, Office of Inspector General, Inspections, Human Resources, Training Academy, Psychological Services and the Crime Analysis/Command Center. She holds a Bachelor of Science and Master of Science Degree in Criminal Justice Management, and also has a Master Certification with Texas Commission of Law Enforcement and Officer Standards and Education. I recently had a chance to ask her a few questions.

Why did you become a Houston Police Officer?

I became a Houston Police Officer because I desired a career, not just a job. I wanted to make a difference with my life and decided that the Houston Police Department afforded me that opportunity. I am a firm believer in the benefits of education and recognized that this was the path I needed to take for self benefit and promotional opportunities. I keep up my knowledge base through professional affiliations, the reading of professional literature, and eventually hope to return to school for a Doctorates Degree.

What career paths have you taken since you became a police officer?

As I climbed the career ladder I have worked and been exposed to various fields. Like all officers I began in the field as a patrol officer. First responders have the authority and the responsibility to provide service to our community, and are the first contacts the public has with law enforcement. This period was the foundation for my career and is the core for all police officers. As my career progressed, I worked in Communications, the Academy, Homicide, as a Tactical Commander, Field Training, Crime Analysis/Planning & Research, to name a few. A major benefit in a career with the Houston Police Department is the wealth of career paths an officer can choose. One can specialize or be a generalist in various units and divisions. I successfully promoted up the various ranks, Sergeant, Lieutenant, and Captain, through a competitive process with my peers. Each rank held new challenges and learning opportunities. In 1988, I was appointed to the rank of Assistant Chief by then Chief of Police C.O. Bradford. In 2004 I was appointed to the rank of Executive Assistant Chief of Police by the current Chief of Police, Harold L. Hurtt.

Was your family supportive of you wanting to become a police officer?

I am supported by a very strong family. Without their assistance, especially from my spouse, a police lieutenant, and our two children, I could not have taken on the additional responsibilities that are inherited with higher positions. As a result of prayer, hard work, tenacity, and family support, my journey with the Houston Police Department has been fulfilling, purposeful, and exciting.
at 12:45 PM

I look forward to your next blog everyday. I was pleased to see this story today, as I am a female and also a new citizen. It is almost like it is fate that I become a Houston Police Officer. I have been interested ever since my boyfriend became a police officer. I really enjoy your blog and love today's story. Please keep up the wonderful work. I read it everyday while I check my emails.

"I became a Houston Police Officer because I desired a career, not just a job. I wanted to make a difference with my life and decided that the Houston Police Department afforded me that opportunity".

Every job I've ever had I say the same thing, I'm tired of just having a job and not making a true difference. I want a long, enjoyable career where I have plenty of opportunities. That's why I applied. I'm looking forward to making it into the academy and the HPD.

Thanks to Assistant Chief Martha Montalvo and Officer McCoy for a very encouraging and informative post. Keep up the great blog!

I too am a new citizen. I love the USA. This is a nice webpage. I want to sign up when I get my college hours.

I was really inspired when I read today's blog. It's really encouraging to see others accomplishing the same goals that I'm trying to achieve as well. It lets me know that I can accomplish anything that I put my mind to. I totally agree w/u. I luv the fact that there are a variety of career paths that you can take while pursuing a career w/ HPD.That was one of the first things that I noticed when I first applied.Thanks so much for sharing your story.I look forward to starting w/HPD soon and making a difference in the lives of others!

Great Story , really inspiring. I have wanted to be a police officer ever since I can remember. Thanks to Officer McCoy and his blog, I can't wait to join to the Houston Police Department. Officer McCoy and Officer Nelson really care about each and every applicant that applies. They are 100% honest with you and don't just tell you what you want to hear.

yay Bobby's mom! you are an inpiration to all the young females at the Air Force Academy, i'm gonna be a general with 3 stars just like you when i grow up.

Hey Roberto montalvo Jr's mom... he's crazy but a great guy awesome job raising him. I hope ur just as awesome as him.:) proud of you. from pope.-J H

your daughter Gabby, is such an inspiration!