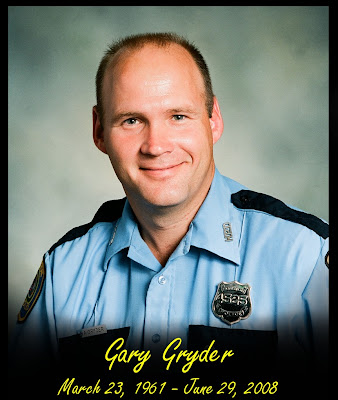 The Houston Police Department suffered a great loss in the early hours of Sunday, June 29, 2008. At approximately 5:15 a.m. Senior Police Officers Gary Gryder and Joe Pyland were working a traffic assignment on the Katy Freeway Service Road eastbound at Highway 6 when a driver entered the construction zone and struck both officers. Officer Pyland suffered a double fracture to his right leg and was transported to Hermann Hospital where he underwent surgery. Tragically, Officer Gryder’s injuries were fatal. Gary leaves to mourn his parents, wife Debbie, a Houston Police Officer who recently retired, a son Austin, a daughter Jennifer and numerous family members and friends. Funeral arrangements are pending. I visited Officer Joe Pyland this morning at Hermann Hospital and he seems to be doing fine physically. He is alert and responsive.

HPD is family. My HPD brother ended his watch yesterday after twenty three years of doing what he loved the most, being a police officer. I have had the pleasure of personally knowing Gary around the softball fields during police tournaments. He always had a smile on his face and a joke to tell. He was also one heck of a ball player. I will miss him as will all his HPD brothers and sisters.

We will miss you Gary. I hear there is no such thing as a strike out in heaven.

This fine HPD officer may have ended his watch here on earth, but he will continue his watch in Heaven - watching over his loved ones until they meet again.

Very nice, thank you for the kind words.

Thank You for all the courageous dedication you put into your years with HPD. I look forward as a prospective cadet to follow in the foot steps of great individuals like yourself. You have inspired me to join HPD so here I go...Wish me luck and look over while this new journey begins. My prayers go out to all those who were touched by your presence.

We the members of the Houston Metro F.O.P. Lodge 98 want to offer our condolences to the HPD family. we all lost a fine Brother in Blue. Gary will be deeply missed and remembered as the HERO that he is.