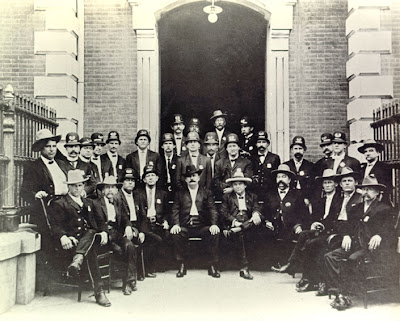 Sorry for the delay in my posts as of late. I lifted a rock that was a little to heavy for my back to handle while landscaping over the weekend. I am sitting with ice on my back in my chair with a laptop in my...well... lap. Anyway, I thought I would share an old photo my grandfather gave me about 15 years ago. Interesting story behind this photo. This was taken somewhere between 1900 an 1907. This was the Houston Police Department back then. I thought the photo was pretty cool, especially when I found out who the guy in the center of the picture was (front row, sitting down to the left of the guy with the white hat, right in the center, with his hands on his knees, wearing a black cowboy hat-all you aspiring detectives should be able to spot him with that description). My father tried to join HPD in the early 1950's, he was rejected because they told him he was too skinny. They told him to go home and eat bananas. Back then you had to be a pretty big guy to join, or at least weigh enough. My dad never joined and ended up with the Marines. My brother attempted to join in 1983, but never completed the paperwork and ended up in Hollywood, making movies and TV. No relatives of mine ended up on the police department, I thought I was it. Then my grandpa gave me the picture above. That man which I described to you was my great, great, grandfather. His name was William Murphy and he was the Chief of Detectives. I became a policeman in 1982 and did not find this out until 1992 or so. My grandfather always assumed I knew. William Murphy was killed in an old fashioned shootout in downtown Houston. I always wondered what drove me to become a Houston police officer.

Maybe it was him.

First off sorry about the accident. Secondly I have a question about the age requirements. Is it 21 to join the academy or does it also fall in line with TCLEOSE and must be 21 by the time you graduate and take the test?

Thanks for the sympathy. As long as you turn 21 prior to you graduating from the police academy you are eligible. The police academy is six months long and it takes about 4-8 weeks to run you through the process depending on your background and how quickly you get your documents to us.

Fantastic! (it's me again) do you have any tips on a good person to speak with in HR/recruiting?

Sure! We can all help you at 713-308-1300, but if you would like, send me an email at officermccoy@gmail.com.
I can get you started in the right direction.