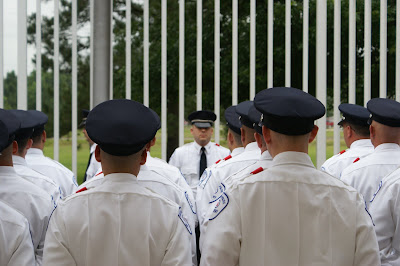 Congratulations Class 199. Academy Class 199 started their quest to become Houston Police Officers yesterday. After six months of training at the academy they will become police officers and began a long and rewarding career. Each academy class is given a number. From this day on, they will be known as members of Class 199 and they will be proud to say it. The academy is six months long and you live off site. It is like attending college. You primarily work day shift hours and have the weekends and holidays off while you attend the academy. You will learn the laws, how to shoot and drive, become physically fit and graduate with all the confidence in the world. Each member of Class 199 will become our brothers and sisters in blue and belong to a very large extended family. Thanks 199, we look forward to seeing you on the streets!
at 5:14 PM

Good luck 199! Keep in the red class tradition and strive for excellence.

I read your blog every day and I can just feel that you are so proud to be with HPD and that you love what you do. If everyone could be so proud of what they do, it would be great.

Thank you for the kind words. This is a career anyone can be proud of. This is family.