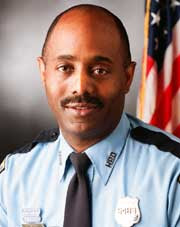 The Houston Police Department has many stories of heroism. Houston Police Officer Eric Fagan, a 23 year veteran, works right here in our Recruiting Unit. He is a friend, co-worker, and will always greet you with a hearty hello and a smile. Who knew that he received the Officer of the Year Award, not once, not twice, but three times! To receive it one time, is an extreme and rare honor with a department as large as ours, but to receive it THREE times... He was honored once for saving a six month old baby's life, once for gathering food and clothes for people who were victims of an apartment fire and a third time for arresting a capitol murder suspect. He has also received a commendation from the National Organization for Black Law Enforcement. Officer Fagan is a selfless individual who always puts others above himself, working hard to truly better his community and this unit. Once you apply to become a Houston Police Officer, you may very well get this officer as your investigator, say hello to him and give him a pat on the back, he deserves it. As a Houston Police Officer, you too, can become a real hero like Officer Fagan. I promise you that there is never a better feeling than when you make a difference in someones life like Officer Fagan continues to do. Now is the time to join the Houston Police Department. Just go to www.hpdcareer.com and start your application process. Heroes start here!
at 9:27 AM