Become part of something larger than yourself. 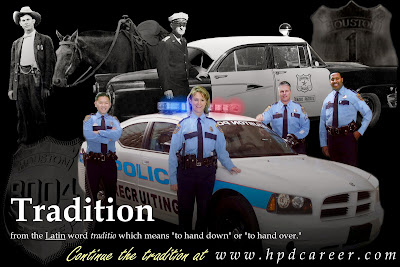 The first constable of the then recently incorporated City of Houston was elected in 1837, making him the city’s first law enforcement officer. The police force itself was not established until 1841 by Houston’s first marshal, Daniel Busley. There was little patrolling of the city during the next 20 years. It was up to the individual businessmen to hire guards to protect their establishments. In 1866, Marshal Isaac C. Lord began to establish HPD as a proper police force by setting hiring rules, regulations, and requirements in hiring practices for recruits. The new policies were reviewed by the city council and were added to the City Charter. Isaac C. Lord lobbied and succeeded in adopting the dress uniform which states, “The dress of the members of the police force shall be navy blue, indigo die and all wool.”
at 3:27 PM

What a cool picture Officer McCoy. I really want to be a policeman one day and Houston looks so cool. You guys have it all. I can not wait until I am out of the Army to join up. Thanks for the blog, it gives me something to look forward to everyday while I am out here.

I would like a copy of that picture for my home office. That is nice. I will email you. Very cool blog. Keep up the good work. It is about time we got more messages about HPD and how fun it is to work here. I have been with HPD for 3 years now and love it.